I spent an interesting couple of days at the latest TippingPoint arts and climate science conference in Oxford, which was held in association with Stories of Change, a new AHRC-funded research project that aims

to help to revive stalled public and political conversations about energy by looking in a fresh way at its past, present and future. The project draws on history, literature, social and policy research and the arts to encourage a more imaginative approach to current and future energy choices. The project is shaped around the cross-party commitments to decarbonisation that sit at the heart of the UK Government’s Climate Change Act. Research has shown that many people feel disengaged, disempowered or actively hostile to the changes to the UK’s energy system required to meet the targets embedded in the Act.

Highlights of the two days included Stephen Peake’s opening presentation (captured in Gorm Ashurst’s photo above): an entertaining and highly-animated demo of changing energy uses and outputs on a high and low-carbon/energy grid that he had mapped out with loo rolls on the floor of the Sheldonian Theatre.

Split into random groups of six during the introductions on day one, participants were asked to write a fifty-word story, something that would take less than two-minutes to speak or read aloud. Looking for shortcuts to aid the non-writers among our group, I wondered if we could each try and come up with a limerick. I thought that the simple, rhythmic form and rhyme scheme, the nonsensical impulse, might make the task easier; more playful and enjoyable. That was the theory.

Funnily enough, given this progressive context, and an impressive gender balance overall, both of speakers and participants, I also gained the tiniest of insights into what being mansplained (or mansplained to?) might feel like, although obviously since I too am a man, this had not been reinforced by a lifetime of gender-based discrimination, harrassment, oppression and/or violence. Still, an observation I had offered in an open conversation with some fellow delegates got casually shot down repeatedly and authoritatively by a man who (and this is the clincher) was in fact wrong himself ;-)

Stained glass in the Hall of Exeter College, Oxford.

A group of us was chatting over lunch, in the rather ostentatiously class-bound — if not to say highly stratified and ossified — surroundings of the Hall at Exeter College. We were talking as so often at such events in recent monts about the need for new kinds of stories about climate change, and new kinds of storytellers. In my recent article ‘Wanted: A New Kind of War Artist’ I argued that the IPCC and the climate science community seem over-reliant on their primary, policy audience and on the news media, where they could be finding new ways (including by working with artists of all kinds) to address wider, public audiences; electorates, even. To illustrate the point here, I raised the obvious recent example of how badly the IPCC’s publication on 31 March of this year of their Working Group II report on impacts of climate change had fared in gaining news coverage; how this most important and unequivocal of reports had immediately been bumped down the news schedules, e.g. on the BBC TV news flagship Newsnight, where UK Chancellor George Osborne’s same-day announcement on the (rather woolly, as it turned out) subject of ‘full employment’ had seemed like a deliberate spoiler, as indeed for US audiences had Exxon/Mobil’s report on climate change risks, also released on that same day; 31 March 2014.

A journalist at our table corrected me. No, he said, the Exxon report hadn’t been published on 31 March but some weeks later, on the same day as the IPCC’s Working Group III report on Mitigation of Climate Change, which had moreover, he said, been rather weak, and that was why any coverage had been bumped. Furthermore, he added — bringing in invisible reinforcements — that he knew for certain that this was the case, because some friend or relative (his brother? I can’t remember!) had been personally involved with the publication of Working Group III. 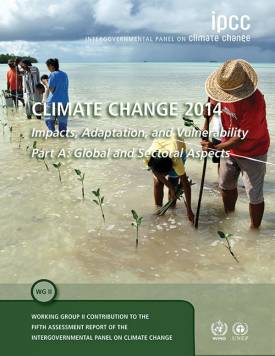 Having written about both the IPCC AR5 Working Group II report on climate impacts and the Exxon report in the days immediately following their respective publications on 31 March, (and, separately, about Osborne’s seeming IPCC spoiler of the same day) I was pretty sure of my ground, and said so, but there was no getting around the confident assurance of my interlocutor, who by now (as Solnit so eloquently puts it in her influential essay) had his ‘eyes fixed on the fuzzy far horizon of his own authority.’

Within what was otherwise a broadly and generously interdisciplinary gathering, such pulling of rank — power-tripping at the energy conference? — struck a strange, isolated note. It is a timely and useful reminder that interdisciplinary working brings together people from many professional domains or ‘communities of practice’, as Scott deLahunta writes in the special section of Leonardo (volume 39, number 5) that I co-guest-edited with Bronac Ferran and James Leach:

In face-to-face meetings in the context of a project, it is professional borders that drift and open as collaborators search for the best means of relating to one another and stimulating creative and lateral thinking. However, these borders will constantly reassert themselves…

In his article’s abstract, deLahunta outlines his argument

that the role of facilitation within art and science collaboration projects is perhaps best described not as a function or position, that of the facilitator, but as a framework for thinking about relations and how to encourage a certain quality of exchange. The article reflects on how the themes of willingness, inter-profession, conversations and wording, empathy, and collaborative writing relate to the conditions for interdisciplinary collaboration.

TippingPoint events seem to be about precisely such a process: creating a framework and encouraging ‘a certain quality of exchange’. And this latest event in Oxford was no exception. Indeed some of the conversations that began at this and their previous conference at the Free Word Centre earlier this year are continuing to develop as I write. I’ll keep you posted.

In the meantime, so much for making the task easier, I don’t think anyone else managed to write a limerick. I had to leave before the final session of the conference, so sadly I didn’t get to hear any other groups’ fifty-word stories either. However, after a few false starts (‘Lord Lawson, that arrogant peer…’, anyone?) I had managed to come up with one limerick as I walked along St Giles on the way to the conference on the Sunday morning.

There once was a climate denier

Who sat very close to the fire.

Asked if he was hot,

And denied that his socks were on fire.

Tony White’s latest novel Shackleton’s Man Goes South is published by the Science Museum — the first novel they have ever published — with an accompanying display in the Museum’s Atmosphere Gallery. The novel is available free from the Science Museum website and from a specially-developed, touch-screen ebook dispenser in the Atmosphere Gallery. The novel giveaway and exhibition run have been extended by the Museum and now continue until at least April 2015.