Rob La Frenais of art and science agency The Arts Catalyst (a.k.a. eminencegris if you use Twitter) posted some great pictures of Outlandia, the new project by artists London Fieldworks: a treehouse artist’s studio and field station in Glen Nevis, Scotland, that will be used to host residencies.

As soon as I saw this I thought: ‘Wow: the best treehouse since Myst!’

Like many people in the 1990s, I had a copy of the computer game Myst because it shipped with my enormous and quickly obsolete old Macintosh Performa.  Along with various easy-to-find walkthroughs (pace Tim Etchells’ fabulous novel The Broken World), there are extensive and inevitably encylcopaedic resources about Myst online. These include primarily the MYSTlore wiki which has a great disclaimer on the front page:

This page is written from an OOC point of view. Events and elements surrounding the Myst Universe are regarded as fictional.

The explanation goes on:

In order to account for the contrast between actual, proven information and possibly fictional, made-up statements, fans generally distinguish between In Cavern/In Character (IC) — regarding everything as real and/or acting as if you are actually in the ages and really experiencing everything — and Out Of Cavern/Out Of Character (OOC) — regarding most information from within the Myst Universe as fictional, and/or that the player is not acting as if he/she is really in the ages. Since you are the main character in the games, the lines between the two can sometimes be blurred, and occasionally deliberately vague. 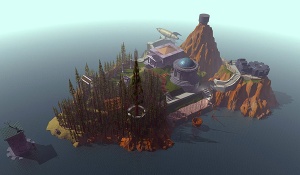 Looking around for an image of the game’s Channelwood (treehouse) level to post here, I see that Myst has been relaunched for the iPhone. I’d be curious-ish to see how the game actually played on a machine that didn’t have to stop for a few seconds before allowing any but the simplest action; the game’s ‘atmospheric’ sounds stuttering and looping all the while.

To play Myst one must wander around an island, exploring, finding switches of various kinds, collecting books and solving puzzles that enable the player to access some other island or realm. Lots of the theme tunes used for the games various levels and loading sequences are shared on Youtube. 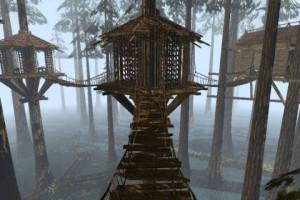 There is some background info about Outlandia on the London Fieldworks site:

Outlandia, originally conceived by London Fieldworks for the Year of Highland Culture 2007 is situated within the remote highland landscape of Glen Nevis in Lochaber, Scotland. An architect designed fieldstation […] built to accommodate local, national and international artist residencies, suspended in a copse of Norwegian Spruce and Larch on Forestry Commission land. The fieldstation will have a distinctive view of Glen Nevis, a landscape of forest, river and mountains with Ben Nevis, Britain’s highest mountain, looming directly opposite. Outlandia has been inspired by legends of forest outlaws and outsiders, both an off-ground place of imagination and fantasy and a real place of inspiration.

In the summer of 1999 I was lucky enough to collaborate with London Fieldworks on Syzygy, a ‘telematic artwork’ designed by Bruce Gilchrist and Jo Joelson and ‘made’ by a ‘temporary collective of artists’ including Bruce and Jo, composer Kaffe Matthews, programmer and pyramid enthusiast Jonny Bradley, writers Steve Beard, Mark Waddell, Jeni Walwin and myself on Sanda Island, off the southernmost tip of the Mull of Kintyre.

My unanticipated contribution to the project (I had an open brief) was to write a story called ‘Stormbringer’, an Elric homage that was subsequently authorised by Elric creator, the immensely prolific and influential Michael Moorcock.

‘Stormbringer’ which was inspired by the Moorcock novel of the same name, had its origins in something that I had discovered on the boat across from Campbelltown; that a former Laird of the island in 1969 had been legendary bass player Jack Bruce of Cream. My short story sees a first generation British R&B musician (not Bruce of course) in self-imposed exile on an island at the gateway to the Atlantic who is dressing up as Elric while waiting to come up on an LSD trip.

On the beach the day we arrived I found a skull and a long, straight, man-sized stick that had been bleached white by sun and salt. I assumed that the skull was that of a sheep, but it had no apparent eye sockets, at least none where one might expect to find them. Since then I have realised that it was most likely to have come from some species of small whale, possibly a narwhal, although like the one in this picture it had no tusk.

In order to explore the island IC, as it were, I lashed the skull to the stick and called it a ‘moonstaff’ (which seemed suitably Moor- cockian), then took up my notebook and walked. Unlike the world of Myst, whether IC or OOC, on this island I did not have to solve puzzles in order to proceed. Instead I was looking for moments of visual or auditory dissonance: the sound of the staff tearing through grass roots, places of sudden shelter where windnoise abated.

Occasionally I would spiral back in to the centre of the island to a fieldstation that had been set up on the smaller of Sanda’s hills. From this point, wearing harnesses that effectively bolted them to the rock, Nic Boothby, Jeremy Boyce and James Robertshaw of AirKraft were using a stack of enormous Rokaku kites to lift a meteorological data-gathering rig designed by Dr Alison Payne of Imperial College. Data from this rig was used to drive a smart material sculpture located in the ICA, London, as well being harnessed by Kaffe Matthews for her compositions and writer Steve Beard for his ‘Island Spirit Generator’; both of which are combined here. There are more of Anthony Oliver’s wonderful images here.

To the kite team, my character’s ‘moonstaff’, this possibly-narwhal-skull-on-a-stick, became the focus of a superstition that was nebulous in origin but specific in effect: when carrying it I became a wind curse. Kites would drop out of the sky.

I laughed about this at first, but quickly realised that the thrum of wind on kite-string combined with their razor sharp sensitivities to wind speed and direction, meant that Nic, Jeremy and James were in effect using the kites as prosthetic extensions to their own nervous systems, and in so doing they were gathering, processing and responding to data far richer than that being gathered by Alison Payne’s rig. This collision of mind and weather was of course part of the initial premise of the project. Bruce and Jo have since written that, ‘Syzygy sought to make metaphorical linkages between mind and weather processes, and was initially interested in the emergent features shared by both.’

On the last morning on the island, I threw both stick and skull back in to the sea. It was an act that I now regret, but it seemed appropriate, and I wasn’t sure that Nic, Jeremy and James would have let me bring it on the boat. If they’d known it was most likely a narwhal skull they almost certainly wouldn’t.

Syzygy is a term that describes planetary alignments. It was an apt title for that project on Sanda Island, not least also because Bruce and Jo are generous and visionary hosts and collaborators who have a rare skill and talent for creating incredibly generative and productive alignments of individuals. I am really looking forward to seeing what kinds of activities and artworks emerge from Outlandia. I am also ever so slightly envious, in the nicest possible way, of whoever gets to work in that extraordinary fieldstation.

Oh, p.s. one very quick afterword. Later, Michael Moorcock told me that he thought it was probably Ginger Baker rather than Jack Bruce who was the Elric fan.