In haste, a quick advanced notice that the next publication from Piece of Paper Press is ATOMANOTES by Liliane Lijn. It will be the 25th title in the series and here is the press release that we just finalised and which will be sent out in due course. We’re going to be holding a launch event at Maggs Gallery in Hays Mews, at the rear of Maggs Bros. Rare Books. 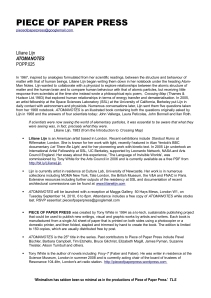 The making of ATOMANOTES spans more than 40 years. Here’s a short extract from the press release:

In 1967, inspired by analogies formulated from her scientific readings, between the structure and behaviour of matter with that of human beings, Liliane Lijn began writing them down in her notebook under the heading Atom-Man Notes. Lijn wanted to collaborate with a physicist to explore relationships between the atomic structure of matter and the human brain and to compare human behaviour with that of atomic particles, but receiving little response from scientists at the time she instead wrote a philosophical epic poem, Crossing Map (Thames & Hudson Ltd. 1983) that explored human relationships in terms of energy transfer and dematerialisation.

It was Liliane’s residency at the Space Sciences Laboratory, UC Berkeley (SSL) that provided a catalyst and opportunity for those questions originally posed in 1968 to be asked again now. See this previous post for background on Liliane’s residency, plus a free download of her essay ‘The Language of Invisible Worlds’. One of the many things that is interesting about this essay is the way that Liliane uses her current research and practice to (as I put it then) ‘continually echo and reframe [her] early explorations’.

Just as has happened in fact with ATOMANOTES. 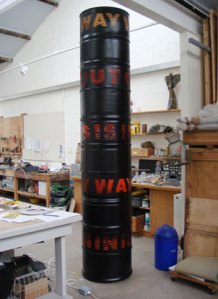 I went to Liliane’s studio a couple of weeks ago to finalise the book. Various new works were installed around the space including a significant (and surprisingly large, at around 3 metres high) kinetic text work from 2009 called Way Out Is Way In Poemdrum (In homage to William S Burroughs). The making of this work too spans several decades. 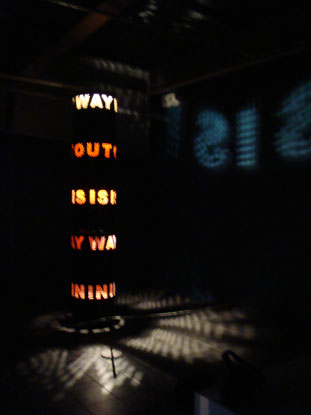 (I’d recommend the aforementioned ‘Language of Invisible Worlds’ essay for background on Liliane’s friendships with Burroughs, Sinclair Beiles, Gregory Corso et al in Paris where she lived from 1958-63.)

The list of media used to make Way Out Is Way In Poemdrum is very interesting:

Liliane has been making kinetic text works for many years. They often comprise motorised cylinders — some aligned vertically, others horizontally like a phonograph — or cones, which subject fragments of text to movements and rotations of varying speeds to transform the words into light and colour. The texts Liliane uses have often derived from conversations and collaborations with writers. Sometimes these text fragments are further subjected to a kind of reductive editorial pragmatism: what will fit. Some early conical works from 1964 onwards are included in the 1974 film What is the Sound of One Hand Clapping.

I was intrigued by the dedication of this recent poemdrum to William Burroughs. Liliane told me that Burroughs wanted her to incorporate some of his text into a kinetic work after seeing an early exhibition of her text works at the Librairie Anglaise on Rue de Seine, Paris in 1963. In a gallery over the road at the same time had been an exhibition of caligraphic paintings by Brion Gysin that were themselves derived from Burroughs’ texts, but which perhaps felt oddly static in comparison with Liliane’s machines and typography. She was summoned by Burroughs, who spoke at length about Naked Lunch and the possibility of collaboration.

Forty-six years later he got his wish, the conversation distilled by time and memory to these five words: way out is way in.

ATOMANOTES by Liliane Lijn will be launched with a reception at Maggs Gallery, 50 Hays Mews, London W1, on Tuesday September 14, 2010.