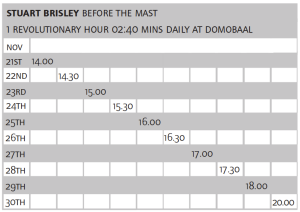 Before the Mast is the title of a new live work by the artist Stuart Brisley that will take place at DOMOBAAL, London from 21st November 2013. (For times and dates click-through the timetable at right.)

Before the Mast is the latest in a number of ten-day performances that Stuart Brisley has made since the late 1960s that reference the ten-day week of the French Republican Calendar. I am currently collaborating with Brisley to research this hitherto neglected aspect of his work. The research is being undertaken during my current residency at King’s College London, supported by CreativeWorks London. The residency enables me to collaborate with Dr Sanja Perovic of the French Department at King’s, who is a leading expert in the field and author of the recently published study, The Calendar in Revolutionary France: Perceptions of Time in Literature, Culture, Politics.

My research is being conducted through and around a series of ten conversations between myself and Stuart Brisley, and a number of other people, including Perovic. Three such conversations have now taken place, in London and Dungeness. There had been no plan to publish anything before the end of 2014, but our first conversation, which took place in June of this year, proved to be quite subtly interesting in its own right, so when Sanja Perovic and I were invited to co-author a text to accompany Before the Mast, we decided that it might be useful to produce an edited and annotated version of the transcript. Editing what had been an informal and wide-ranging conversation allowed us to devote attention to a quite elusive and unexpected thread that had emerged in the course of the discussion, concerning the fleeting production in public performance of an unselfconscious revolutionary state.

This text is entitled — quoting Stuart Brisley — ‘Into Day One of the Revolutionary Period’.

I am grateful to DOMOBAAL for making a PDF of the text available. You can download this free by clicking the title above, or by clicking-through this screengrab of page one (right).

In total, seven monographs have been published to accompany Stuart Brisley’s current exhibitions at DOMOBAAL and Mummery+Schnelle. For exhibition opening times etc. please see below.

Here is the information from the DOMOBAAL site: