I pricked up my ears at an interesting but only half-heard fragment of conversation on the BBC Radio 4 programme Start the Week this morning. I had to go back and listen again in order firstly to see who had been speaking, and secondly how the theme of climate change had briefly emerged in a conversation that had otherwise been largely devoted to news reporting of ‘the whistle-blower Edward Snowden’, and a posing of the question of why there had been so ‘little outcry among the British public’. 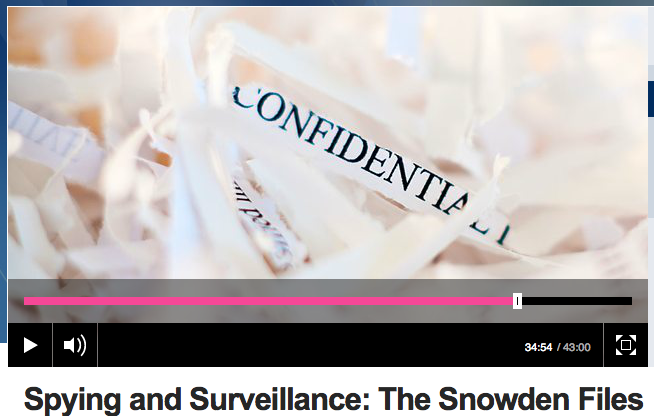 What had caught my attention comes at around thirty-four minutes in to the programme (34:54), when the conversation takes a slight detour into the need to ‘popularise’, i.e. to create a wider and more engaged readership for, complex issues such as climate change (here called ‘global warming’).

Here is a transcript of that part of the conversation. It is worth bearing with the solipsistic newsroom jargon, the talk of ‘packages’ etc., because de Botton particularly begins (albeit fleetingly) to make an interesting case for the value of art, of literature and stories in understanding climate change. Even if ‘climate change’ here is being used as a proxy for any complex and international mega-news story, this strikes a chord. I’ve said for a while that if you want to hear interesting and engaging stories about climate change you might do better to ask writers of fiction rather than the vast committees of scientists and civil servants who are charged with generating the reports of the IPCC. Indeed this was part of the motivation for writing my 2013 novel Shackleton’s Man Goes South (Science Museum).

We pick up the conversation as host Anne McElvoy asks whether it matters that more people click on celebrity froth than serious stories:

Alain de Botton: It matters hugely, because we’re in a democracy. And in a democracy you have to win a majority in order to get things to change. So it’s all very well, making a cogent, sober case and then blaming everybody else for being too stupid to care about it, but the real challenge is how do you get people to care as much about global warming as they do about Taylor Swift. That is an artistic, aesthetic, communication problem that places like the Guardian are only just beginning to think about. Because that’s–

Anne McElvoy: Well OK, you’ve beaten up the Guardian a fair bit there, but just look to the readership–

Anne McElvoy: –here, an emerging readership, and the fact that we were just discussing where our children read news and if they did, did they read it online, and did they read it in the same sources as we did, and the answer for a lot of people is probably not, but in effect people probably vote with their eyeballs now. So, however brilliantly you presented a package on, say, global warming, you might find that you’re outdone in hits by a piece on Taylor Swift, and there’s not much you can do about it.

Alain de Botton: Well, you have to, I think, too often the most serious journalists think that the seriousness of the issue absolves them from the challenge of popularisation. And popularisation is a word with a sort of ambiguous history of associations. It’s seen normally as a sort of cheapening thing. If you popularise something you’re cheapening it, and serious people are very averse to popularisation. In a democracy, if you care about something, you have to know how to popularise it, because otherwise– [inaudible]

Anne McElvoy: But what would that, I don’t quite understand what that would look like.

Alain de Botton: Well, what it would look like, we all know that we’ve sometimes seen packages on very serious issues, and we’ve yawned and switched channel or flipped to another page on the internet. In other words, it is to do [with], I mentioned the word ‘art’, you know. Think of Shakespeare. Shakespeare takes us into the machinations of political dramas etc., and he makes us care about pretty weird stuff. So suddenly there we are in the Danish court and something odd’s happened, but we’re gripped. It’s really exciting. You know, sometimes when we get taken into what’s happening in Turkish politics, people are falling asleep, because the article that is telling you about it has not done it with sufficient artistry and imagination. And that’s a real problem in a democracy.

Anne McElvoy: For some reason I have a mental image of a piece on global warming accompanied by an image of Miley Cyrus saying, ‘Phew, it’s hot in here.’ [Laughs.] Annette, as news correspondent for many years, do you recognise that conundrum that Alain throws up.

Annette Dittert: I totally see the point and the problem, although you cannot accuse the Guardian of being too boring here, because it’s a complex story, but I think in general this is a problem: how do you get a story that complex still in the public interest. How do you make sure that the sense of outrage doesn’t wear off before something has changed and that is certainly a big challenge not only for the Guardian but for all the media all over the world … 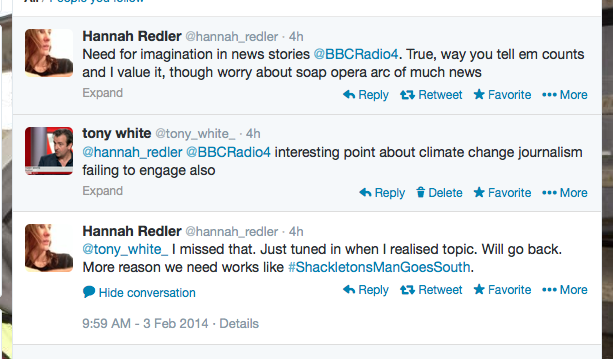 The discussion then returns to Edward Snowden. Perhaps climate change is too off-topic so late in the programme. In any case that aspect of the discussion is closed down rather than expanded. McElvoy seems to still be responding to some pejorative idea of what the popular might be, rather than to the larger more expansive point that de Botton’s talk about ‘popularisation’ presaged: how good art can engage the imagination on the most complex and/or arcane subject matter. (Dittert then seems to be about to speak of the challenge of making a complex story stick in the public imagination, but instead speaks of ‘the public interest’, and we return to Snowden.)

Perhaps it’s just me, but for a minute de Botton came close to saying something much more interesting than his usual ‘art-as-therapy’, self-help schtick.

Also listening — and commenting on Twitter — was Hannah Redler, director of the Science Museum Arts Programme.

Shackleton’s Man Goes South was published by the Science Museum as their Atmosphere Commission 2013, with an accompanying display in the Museum’s Atmosphere Gallery, out of a stated and specific desire to commission art works that might ‘explore potential political, social and cultural impacts of climate change.’ In other words, the Science Museum at least are already bringing the ‘artistry and imagination’ that de Botton calls for into how they are prepared to engage the public with climate change.