On his way out, a PNG guard hit the detainee’s head with a wooden pole. As he picked his head up, the PNG guard recognised him as a friend who was giving him cigarettes every day. He was shocked and said, ‘Sorry, sorry my friend.’

This story has become one of the jokes currently in the camp. ‘Sorry, sorry my friend.’

They are all locals who are employed and work here, and yes, many were on shift in full uniform and many were off shift and in personal clothes. At one point there was a G4S PNG guard in full uniform, but he wore thongs* as he didn’t get a chance to put his boots on.

This quote is from a story in the Sydney Morning Herald of 14 March 2014, where it forms part of a very disturbing eye-witness account of the violence in February 2014 against detainees in Australia’s detention centre on Manus Island, which resulted in the death of Reza Barati. 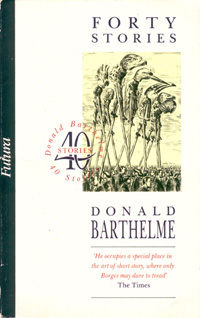 Parts of the account feel strangely redolent of the world of Shackleton’s Man Goes South, in particular Chapters 12 and 13 of my novel which are set in the ‘CBCP Endurance’, a fictional migrant detention centre on South Georgia. (Chapter 13 is in fact entitled ‘T-shirt and Flip-flops’.)

The quote above is also notable for two things.

Firstly, the euphemistic but nonetheless shocking description of detainees having to bribe guards ‘every day’ with cigarettes.

Secondly, the way it maps the communal and creative actions of detainees in developing jokes, with e.g. ‘Sorry, sorry my friend’ becoming an example of what (in Shackleton’s Man Goes South) I call ‘crowd-pleasing gags and locally satirical asides … in-jokes’, and which Donald Barthelme in his short story ‘Opening’ describes as ‘catchphrases of general utility’.

Barthelme and I are both talking about aspects of performance. In Shackleton’s Man Goes South this relates to the drawing of topical and satirical material into a performance, while Barthelme of course is referring to the way that actors in a play create jokes out of a performance by adapting ‘scraps of dialogue from the script’ to their own purposes. The creative process that the eye-witness describes on Manus Island may not be obviously to do with performance, but it does echo both of these acts.