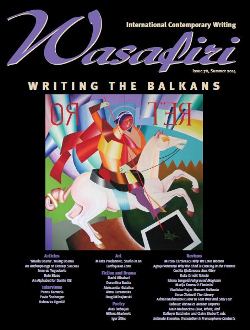 I was delighted to have been invited to contribute to the ‘Writing the Balkans’ issue of Wasafiri magazine (Issue 78, summer 2014), edited by Vesna Goldsworthy, author of the brilliant Inventing Ruritania: The Imperialism of the Imagination, and the more recent memoir Chernobyl Strawberries.

The magazine is now out, and it really is an excellent issue. There are contributions from many friends and colleagues from the region and the Balkan studies sphere, including Wendy Bracewell, Alex Drace-Francis, Kapka Kassabova, Andrea Pisac, Danilo Kiš biographer Mark Thompson, and many more. There are also some poems in translation from Milena Marković — whose work I had the pleasure of introducing in London at an event I chaired a decade or more ago when she was part of a panel of visiting writers that also included Vladimir Arsenijević and Saša Rakezić a.k.a. comic artist Zograf, who lives near Belgrade in the town of Pancevo.

All three — Arsenijević, Marković and Zograf — are interviewed in my 2006 non-fiction work Another Fool in the Balkans, (currently out of print, but some copies available from abebooks). 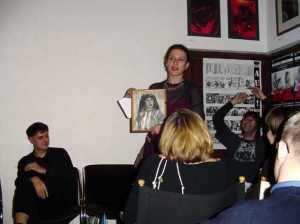 This special issue of Wasfiri is being launched with a day-long conference at the British Library today entitled Balkan Day – A Celebration of Creativity and Identity. Here is the blurb:

This event promotes the Balkan region from the perspective of its literary and cultural achievements, and widens the knowledge of our shared European heritage, especially in the centenary year of the start of World War One. By bringing together some of most prominent Balkan writers, as well as British academics and commentators who have a long-standing relationship with the region, we hope to stimulate discussion and interest, as well as provide a counter-balance to the negative perceptions sometimes promoted in the UK media. Featuring: Dubravka Ugrešić, Vladislav Bajac, Igor Štiks, Andrej Nikolaidis, Muharem Bazdulj, Dragan Kujundžić, Christina Pribicevic-Zoric and Alex Drace-Francis. With special literary afternoon events: ‘Balkanisation: the pick of recent Balkan fiction in English’ with Rosie Goldsmith and the UK launch of the Wasafiri Literary Magazine special Balkan edition, with guest editor Professor Vesna Goldsworthy.

Demand for the event is high, so I gather that it has been moved to the British Library’s largest auditorium. More info and booking details here.

My contribution to the Writing the Balkans issue of Wasafiri is a review of The Library by Zoran Živković, an interview with whom is also included in Another Fool in the Balkans. Here is a taster of the review: 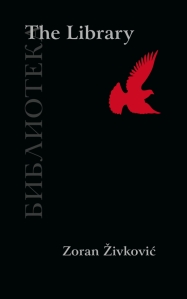 ‘Mosaic’ in this sense means that the novels in the series are each comprised of a number of short stories that could equally function as stand-alone pieces, but when read together tell a larger story; one in which theme and motif are refracted through a diversity perhaps of time, place, character and voice. Furthermore, all ten of these short novels bear the collective title Impossible Stories, and as well as new editions of some of the individual novels – including the one under review here – a complete edition of the series has now been published in Belgrade in both Serbian and English languages.

[…] The Library, then, is a mosaic novel told in – or comprising – six parts: ‘Virtual Library’, ‘Home Library’, ‘Night Library’, ‘Infernal Library’, ‘Smallest Library’ and ‘Noble Library’. All six stories are set in a kind of universal twentieth century, whose familiarity serves to emphasise the single uncanny, surreal or supernatural element that will disrupt it: a municipal library which changes nature after dark, a single volume that contains an infinity of unpublished books, or a writer’s possible futures glimpsed in a spam email. Of course, libraries are a familiar trope in literature, and the ones conjured here have neither the lightness and agility of a story by Jorge Luis Borges, nor the ethical complexity and historical velocity of the work of his compatriot Danilo Kiš, but Živković the master craftsman is creating something of intrinsic value.

To read more, of course, and to access the many brilliant contributions that make up this excellent issue of Wasafiri, you will have to buy the magazine. Vesna Goldsworthy reported a couple of days ago that single copies of issue 78: Writing the Balkans can be purchased directly from Wasafiri.

To obtain a copy please email wasafiri@open.ac.uk with your request. Additionally there is a special discount until the end of July 2014 for the purchase of issue 78 Writing the Balkans, pricing as follows:

International and domestic payments are most easily carried out by paypal to wasafiri@open.ac.uk but please email the magazine if this isn’t possible for alternative arrangements.