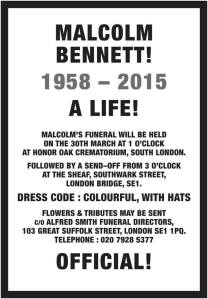 I was shocked and deeply saddened to hear of the sudden and premature death of my friend the writer Malcolm Bennett. Normally I would be pleased to receive an email from Mally’s friend and manager Nigel Proktor. It might contain the offer of doing a London warm-up with Mally before he went off on tour, or—as I had been hoping—to take part in an event or two around publication of the promised new book, but not this time. Instead I shall be joining Mally’s family and his many friends at Honor Oak Crematorium in South London, to give him a send-off, and to celebrate his life and work.

Sadly it took the death in 2009 of journalist and poet Steven Wells (a.k.a. Swells or Seething Wells), another larger-than-life veteran of the 1980s spoken word scene, for me to meet Mally in the first place. I had just come off the stage at the Monarch in Camden, where I was reading at a memorial event for Swells when Mally came over and introduced himself. Dressed in full ‘man in black’ mode—with wide-brimmed gaucho hat and silver-topped cane—he cut quite a dash, but I knew exactly who he was. 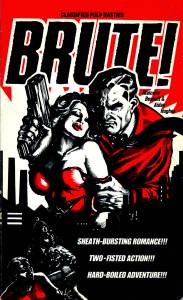 Bennett and Aidan Hughes’s Brute! had been a real gem in the 1980s. Whether in the style press or the Sphere paperback (the two incarnations that I knew of at the time) Brute! was immediately visually arresting. Aidan Hughes’s art work combined comic strip and expressionist illustration styles with film noir schlock and social realist triumphalism. Bennett’s prototypical flash fictions are written in a style (‘wood speak’) that combines tabloid hyperbole and pulp cliché to create precise and witty haiku—figuratively speaking—of violence and double-entendre.

Brute! created a new kind of self-conscious pulp aesthetic that was as original as it was influential.

Looking back, Brute! was also clearly a harbinger of the 1990s “avant-pulp” scene, to use author Jeff Noon’s term (in turn enthusiastically adopted by Steven Wells), which manifested first in the early novels of Stewart Home and Victor Headley, and which also had roots, like Brute!, in the energy of live literature. It is a small point (literally), but the exclamation mark on the title of my debut novel Road Rage! from that period is directly traceable to Bennett’s “classified pulp nasties”—OFFICIAL! 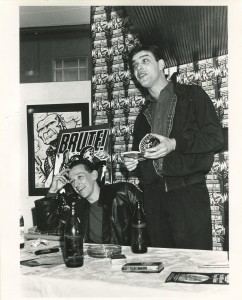 Incidentally, I was never completely sure at the time whether it was Swells or Malcom Bennett who first used this parodic exclamation of verbal authoritativeness. I had come to associate ‘the O word’—OFFICIAL!—with Swells’s pronouncements, but looking back I think that it was only used by him in homage to Malcolm and to Brute!

When Steven Wells was planning his own Attack Books! project—a roster of new and strikingly designed avant-pulp novels published under his imprint in 1999—he would frequently cite Brute! and Bennett as formative influences. Bennett was in prison at this time, and Swells visited him, at least partly, as I understood it, to see if he would be interested in writing a novel for Attack. In those days when it was not yet forbidden to send books to prisoners in the UK, Swells had also taken it upon himself to supply Mally with reading-matter. I was really honoured when Mally told me at the Monarch that night that he had particularly loved the opening chapter of a novel of mine—a police satire entitled CHARLIEUNCLENORFOLKTANGO—that Swells had given him in manuscript, pre-publication form.

Mally and I stayed in touch after our meeting at Swells’s memorial gig, and we quickly hatched plans to do some events together. First off was a London warm-up in Shoreditch’s tiny Three Blind Mice bar, before he went off to do a festival in Ireland. It was a great night; the best fun. Mally was reading from a new collection I,BRUTE! and he was on brilliant, deadpan form, hilarious and charismatic, and he had the audience eating out of his hand before, during and after the gig. What a charmer! THE END. 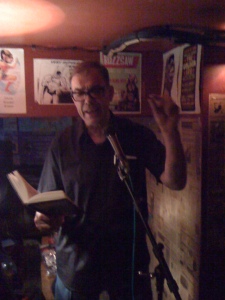 I have another reason to be grateful to Mally, because in the run up to that gig he asked if I would include a reading from CHARLIEUNCLENORFOLKTANGO in my set. I demurred. Here was a novel that had originally been written to satirise the institutionally racist convulsions of an alienated, pre-Macpherson Report Metropolitan Police force, but I hadn’t read from CHARLIEUNCLE… live since it had gone out of print when publisher Codex had closed down nearly a decade before. But Mally wasn’t taking no for an answer. At a subsequent gig we did at the Gladstone in Borough he warmly and candidly introduced CHARLIEUNCLE… as something that had meant a great deal to him when he was locked up. It was the best, most heart-felt intro I have ever had. What higher praise could there be?

After that, whenever Mally came to one of my book launches or readings, he’d always say, more or less, Yeah yeah, love it, Tone, but it’s not CHARLIEUNCLENORFOLKTANGO! When are you gonna do CHARLIEUNCLENORFOLK-fucking-TANGO again?

I emailed Mally just a month or two ago to see if we could line up anything for this year, and to let him know that I’d be reading from CHARLIEUNCLENORFOLKTANGO again at the October Gallery, for the events programme that was running alongside their then William S. Burroughs exhibition.

“I’ll be there, Tone,” he replied. “Can’t wait!” Then, recalling a notorious incident at the One World International Poetry Festival in Amsterdam in the early 1980s, he asked,

How come I never do this stuff? Y’know, I BLEW Burroughs off the stage at One World. So much so that he tried to stop the after show party because everyone was ignoring him to talk to me. And then Gregory Corso [said] I’d ‘upset’ Bill by being ‘better’ than him and therefore had no respect. But am I invited to be a part of a Burroughs thing? NO!

The story is typical Malcolm Bennett, a reminder both of his swagger and his vulnerability.

My thoughts and sympathies at this sad time are with Mally’s family, and his nearest and dearest. For myself, I will miss Mally’s vivid presence and his occasional rants, bumping into him on Borough High Street, his friendship and support.

I am gutted that we cannot perform together again. Life certainly is a BRUTE, and that’s OFFICIAL! (And with Steven Wells and Malcolm Bennett both gone, who, now, is left to say that?)