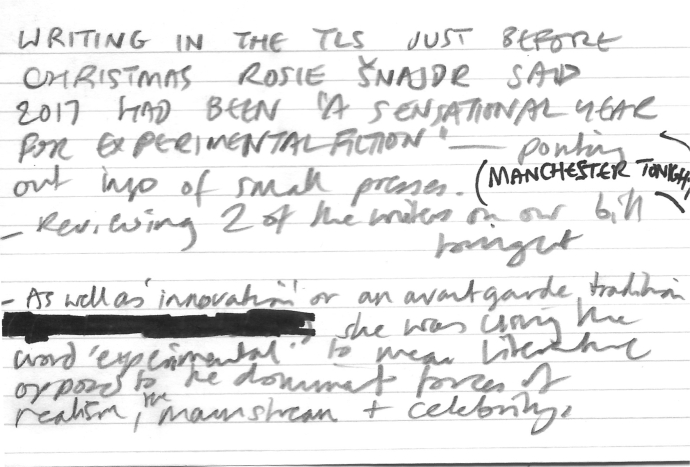 I found these cards  in my jacket pocket the other day. They comprise notes I’d made in advance of ‘Under the Paving Stones’ – the Faber Social night of experimental fiction that we put together to celebrate publication of The Fountain in the Forest – knowing that I would have to introduce three great women writers on the night. In order of their appearance (on a bill which also included Kirsty Gunn, Richard Milward and myself): Joanna Walsh, Iphgenia Baal, and Eley Williams. Since this particular Faber Social had been put together collaboratively, Faber’s Lee Brackstone and I shared MC-ing duties: Lee introduced me; I introduced Joanna; Lee, Kirsty. After the interval I introduced Iphgenia, Lee did the honours for Richard Milward, and I introduced Eley Williams.

The first card quotes Rosie Šnajdr in the TLS. My additional note ‘(MANCHESTER TONIGHT)’ was a reminder that I should mention the Republic of Consciousness Prize 2018 (a prize for books published by small presses) the shortlist for which which to be announced that same night, 19 February, following a day of panel discussions on the subject of small presses at the University of Manchester’s New Writing Centre.

These are my notes for Joanna Walsh, whose Worlds from the Word’s End is my favourite short story collection of 2017. (FYI, I did check with Joanna and the title of her forthcoming novel Break.Up  is pronounced ‘break up’, not ‘break-dot-up’.) 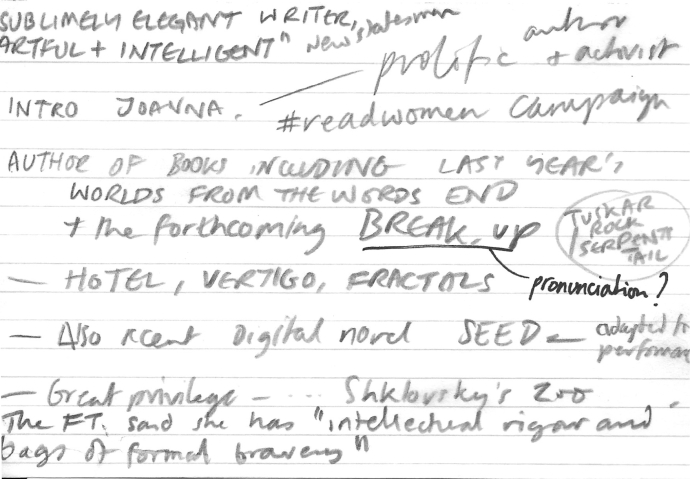 These notes on Iphgenia Baal include a reminder that I was to draw the winner of our The Fountain in the Forest prize crossword. BTW it may not be clear from my handwriting, but the line ‘Puts the psycho back into psychogeography’ is a quote from Stewart Home. 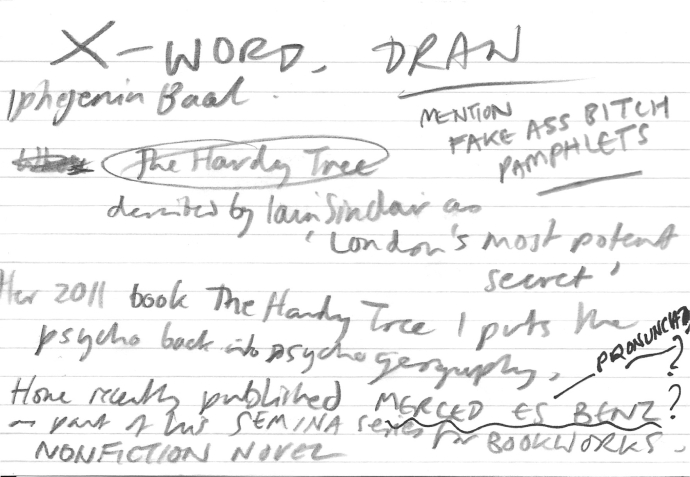 And finally, Eley Williams – and my additional note here was to check with the audience whether anyone knew if the shortlist for the Republic of Consciousness Prize had been announced yet, up in Manchester — it had! 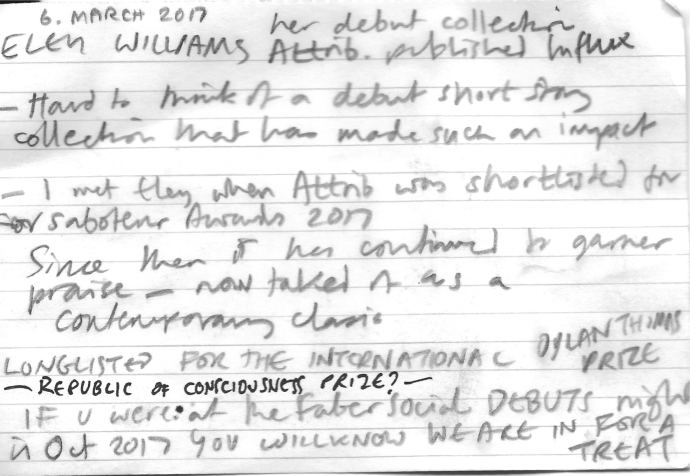 Since then, of course – this week! – Eley Williams and Influx Press have together won the Republic of Consciouness Prize (here is a prize that rewards both author and publisher) for Williams’ brilliant collection, Attrib. and other stories (As I said in my notes, it is hard to think of a debut short story collection that has made such an impact.) The result was announced in Fyvie Hall, at the University of Westminster on Monday, and reported in the Bookseller here. Congratulations to all.

I was delighted to learn that to celebrate Influx and Williams’s win, the TLS have brought Rosie Šnajdr’s review ‘Toothsome Prose’ (the piece quoted above) out from behind their usual paywall.

Reviews of The Fountain in the Forest