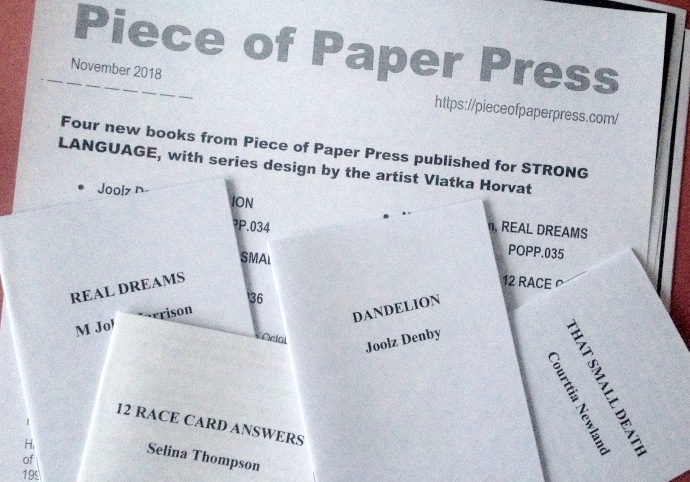 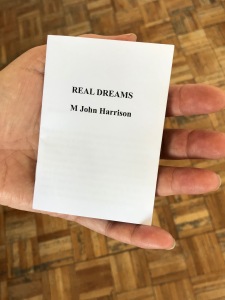 Specially commissioned and first published in October 2018 as part of STRONG LANGUAGE curated by Tim Etchells, Piece of Paper Press is delighted to present four new artists’ books by Joolz Denby, M John Harrison, Courttia Newland, and Selina Thompson, each in a special edition of 100 numbered copies from a strictly limited print run of 500 copies of each title.

STRONG LANGUAGE was three days of readings, performances, projections, installations and discussions curated by the artist, writer and performance maker Tim Etchells of Sheffield’s Forced Entertainment, which took place at the newly re-opened Site Gallery, Sheffield from 11–14 October 2018, as part of the city’s Off The Shelf Festival of Words 2018. 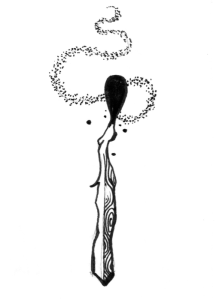 Highlighting radical writing and independent publishing in the UK, STRONG LANGUAGE centred on Tony White’s Piece of Paper Press, and included the first ever comprehensive display of all titles produced since the project’s inception in 1994, plus selected artworks and ephemera from the Piece of Paper Press archive.

The new titles by Denby, Harrison, Newland, and Thompson were distributed free at a number of live events and discussions during the STRONG LANGUAGE weekend in October 2018. Series design and typesetting of the STRONG LANGUAGE titles for Piece of Paper Press is by the artist Vlatka Horvat.

STRONG LANGUAGE took place at Site Gallery, Sheffield, 12–14 October 2018, curated by Tim Etchells, in association with Off The Shelf Festival of Words. STRONG LANGUAGE was part of Cultural Destinations 2, a project of Sheffield Culture Consortium, funded by Arts Council England.

Buy Tony White’s The Fountain in the Forest